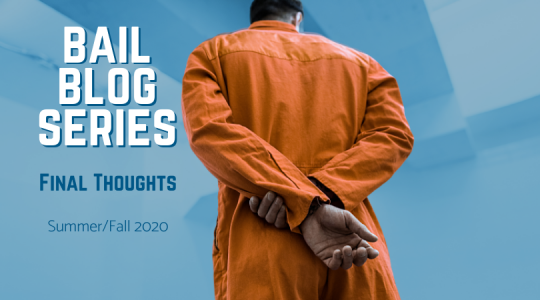 “It’s just a messed up system. It makes me feel like…I’m not a free American citizen.” –George*

The pretrial detention process is chaotic, frustrating, and exhausting for the people mixed up in it. It creates and perpetuates a cycle of criminality on the basis of poverty. George, introduced in a previous blog post, bluntly encapsulated this sentiment when he described his anger towards the bail process and the larger criminal justice system. His perspective is reflective of systemic issues in securing pretrial release: lengthy processing times, crushing bond amounts, convoluted payment procedures, and hard-to-obtain bail refunds. George emphasized how the system, instead of allowing an individual to account for harm done and move forward from their arrest, instead entrenches them further in the pretrial process, as well as in the long-term consequences that follow.

The difficulty of making bail is even more distressing when considered alongside the repercussions of not making bail. Those who remain in pretrial detention are significantly more likely to plead guilty, and thus are more likely to be convicted, than their released counterparts. This suggests the existence of a pool of people—those who may not have been convicted if it wasn’t for their inability to make bail—whose sentence has little to do with guilt and even less to do with justice.

Over the past few months, this has become a recognizable pattern of injustice inflicted on people undergoing the pretrial detention process in Harris County. The system allows for and, in fact, enforces a set of procedures that are not only baseline unwarranted, but, in the context of their consequences, are plainly cruel. We see this with court resets, which manipulate guilty pleas under the guise of legal procedure. We see this with poor jail conditions, which are largely ignored by the public but cause very real safety and health concerns, including in the larger community as people cycle in and out of jail. We even see this with release, where the effects of pretrial detention linger in increased financial and societal burdens. After being forced to live through this pattern, of course George and others in his position are angry. I’m angry too.

Pretrial detention and its barriers to release not only take away a person’s economic stability and social ties, but also their hope. Because of their poverty, before they are found guilty or innocent they are essentially already sentenced. In a jail cell, awaiting an uncertain trial date under poor conditions—hungry, cold, isolated, and, now, potentially exposed to a deadly virus—they are told this is what justice demands of them. We are told this is how justice wants us to be.

Working on this blog series has helped me see pretrial detention more clearly. In many ways, I feel that we as a people are beholden to a notion of justice that we cannot understand, but which we cannot bear to lose. Status quo pulls against the tide of time, keeping our feet planted on a shore of antiquated laws and perspective, where cumbersome bureaucracy goes unquestioned and people who are arrested become not just criminals to the public eye, but boogeymen. The longer we stay here, the harder it is to see the inhumanity inherent in this stagnation.

For a long time, it was hard for me to see the inhumanity in my stagnation. I was the naïve Iowan girl protected by privilege and daydreams. When I did happen to think about jail and inmates and crime, it was never on a personal level. It was in context of the other people—you know, the “bad” ones who did “bad” things. The threads of our flag were woven with liberty and justice; the law was protective and shiny; judges would never bruise their benches with gavels. With the veil of this naivety lifted, I learned of a world where our flag is bleeding and battered, and the law is the perpetrator. Hearing the stories of George and others who have fallen victim to a predatory pretrial process, it was hard to imagine how this historical, cultural, and legal web of exploitation—let alone the twisted knots of the larger criminal justice system—could ever be untangled.

But slowly, carefully, I allow myself to have hope. James, introduced in the last blog post, does too. “[Being released on bail] can actually work. It can work in your favor.” Over the past three decades, public opinion on criminal justice has shifted from a preference for harsh enforcement and sentencing to one that prioritizes rehabilitation and treatment. This push has spurred tangible structural change, including bail reform. For example, Harris County settled a case last year by agreeing to reform parts of its money bail system. Notably, this reform includes release without bond for most low-level defendants. When fully implemented, the reform will facilitate reentry for many people who, under the current system, may be forced to spend days, weeks, and even months awaiting trial from a jail cell.

We are still a long way from remapping our current punitive, wealth-based bail system into a pretrial process that is equitable, humane, and just. That process requires active, engaged, constant learning. It requires minds to change. Mine certainly has.

*Personally identifiable information, such as names and charges, have been altered to protect individual privacy.

This blog post is the final entry in a series sharing first-person accounts of the bail system in Harris County. Through interviews with system-impacted people, the author explores stories of the local justice system. Read previous posts in this series here, here, here, and here. 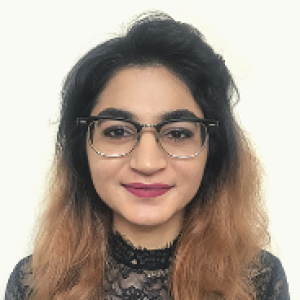