Fighting for a Cite-and-Release Ordinance 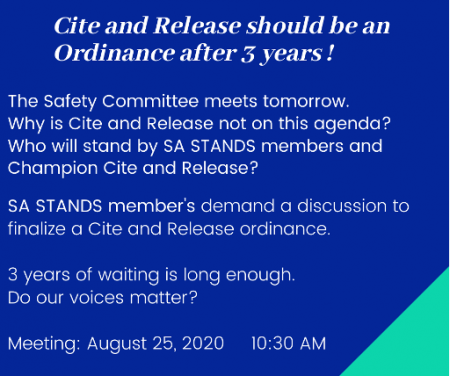 TCJE has been supportive of local partners who have long been fighting for a comprehensive cite-and-release ordinance in San Antonio, which would prevent arrests and instead require citations for certain offenses.

We have joined in meetings with the Mayor, Pretrial Services, and the DA’s office, and we initially got the backing of the Chair of the Public Safety Committee. However, in 2020, the introduction of the ordinance was delayed until 2021. Still, to bolster community support for the ordinance, SA Stands launched a petition, and we have collectively engaged in a social media campaign to educate people about the ordinance and its importance, especially for communities of color. Ultimately, though, the Public Safety Committee Chair claimed she would only back a resolution, not an ordinance. In response, advcoates sent a letter to the Committee sharing our disappointment and advocating for the strongest possible resolution. 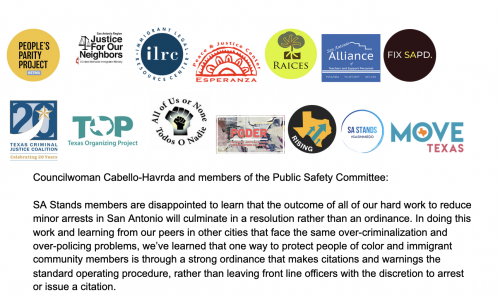 TCJE and our partners remain in strong support of an ordinance. In February 2022, TCJE produced a short report for local leadership — with the input of SA Stands and ILRC — that detailed: the current failures of policing and incarceration, especially for people of color and other marginalized communities; data on cited, arrested, and jailed populations in San Antonio; and the need for a comprehensive cite-and-release ordinance "that seeks to make arrest an absolute last resort; expand the use of IDs, and ensure robust and timely data collection and community input."