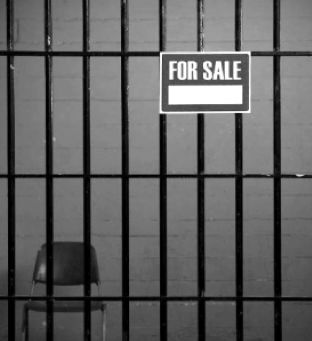 ADVOCACY WITH STATE AND NATIONAL ORGANIZATIONS: From 2015-2016, TCJE was invited to sit on a state-level advisory group to assist a standing committee of the Texas Judicial Council, which issued recommendations for Texas courts on enhancing public safety and social outcomes when making pretrial release decisions.

Separately, the Laura and John Arnold Foundation and John Jay College of Criminal Justice invited input into the development of a national pretrial research agenda that will be considered for future funding by the Foundation. TCJE submitted recommendations specific to the costs of commercial bail vs. pretrial release systems, and presumptive release on unsecured bond. Ultimately, TCJE was the only state group invited to submit recommendations from the field, alongside five national groups.

SUPPORT FOR LITIGATION AGAINST THE COUNTY: TCJE was supportive of the federal civil lawsuit filed against Harris County in 2016 for its unjust misdemeanor bond system. We provided the Civil Rights Corps (CRC) with data and other intelligence-gathering on the ground, and, in response to an op-ed by Michael Kubosh, a Houston City Councilman and bail bondsman, TCJE co-authored an op-ed with TOP about the current bail system promoting profit over justice. The federal lawsuit, which was formally settled in late 2019, increases access to personal bonds for approximately 85% of misdemeanor defendants. Jay is now assisting the individuals selected to serve as the Federal Monitor over the settlement, specifically by serving on the Community Working Group for the Monitor Team, which is advising the Team as it oversees the county’s compliance with the consent decree over seven years. 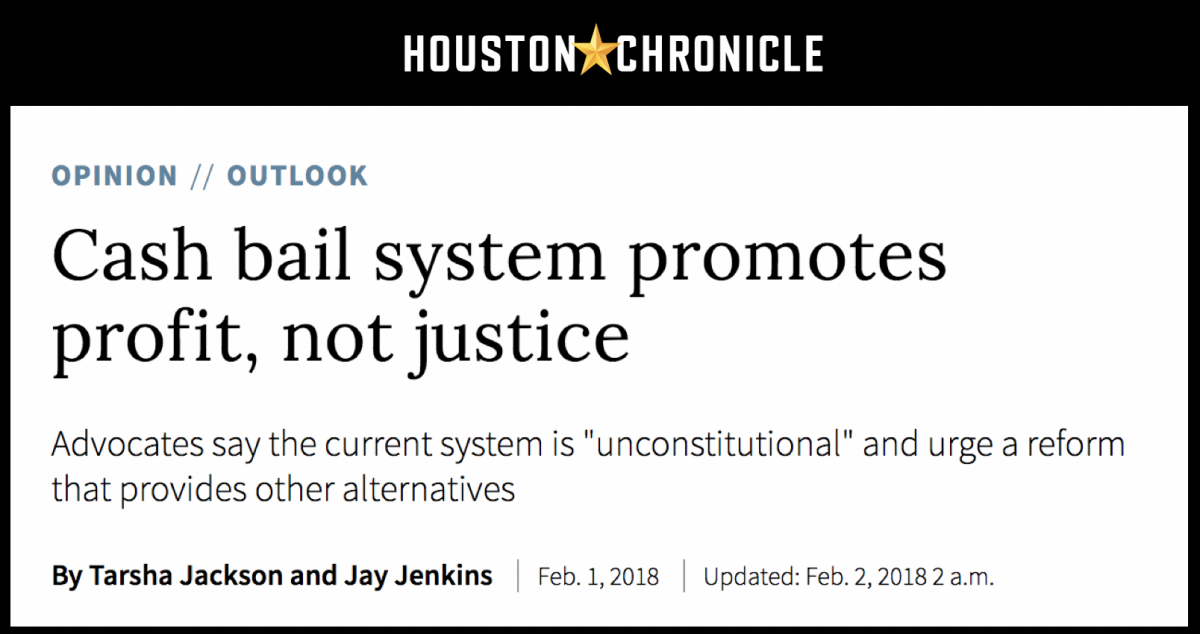 We separately worked with TOP and CRC to request and review videos of magistration hearings, finding damning video of judges mistreating defendants. Publication of those videos led Texas Senator John Whitmire to file complaints with the Texas Commission on Judicial Standards against three of Harris County’s five criminal magistrates for failing to issue personal bonds for indigent defendants, or even inquire about their indigency status. This, in turn, shed light on a longstanding practice wherein criminal and district court judges were directing magistrates to deny no-cash bond to all newly arrested defendants, in violation of state judicial conduct rules.

SUPPORT FOR LITIGATION AGAINST THE CITY: TCJE also supported a 2016 lawsuit filed by the Civil Rights Corps against the City of Houston. This suit was bolstered by jail booking data – captured by TCJE and our partners, resulting in plaintiff identification – that showed a lag between arrest/booking and the probable cause hearing. (While provision of the hearing may be the responsibility of the County, the City is liable for holding people for more than 48 hours without the hearing.) In 2018, a U.S. District Judge found that city officials intentionally destroyed evidence, which Jay called “an extraordinary ruling” against the city. In July 2020, the Houston City Council voted to settle the lawsuit and give plaintiffs $1.17 million in exchange for indemnity.

CALLING ATTENTION TO PRETRIAL NUMBERS: Since January 2020, TCJE and TOP have been issuing weekly pretrial reports to illustrate how Harris County’s felony judges are jailing thousands of people prior to trial simply because they cannot afford the money bail required for their release. The reports provide the daily average number of people detained prior to trial on each judge’s docket, and they highlight the hefty cost of pretrial detention to Harris County’s taxpayers. TCJE has been especially vocal about pretrial release in light of COVID-19, sharing data on the limited releases permitted by Harris County district court judges – who have left more than 6,000 people in jail awaiting trial – and pointing out the significantly high infection rates in the Harris County Jail compared to other locations. 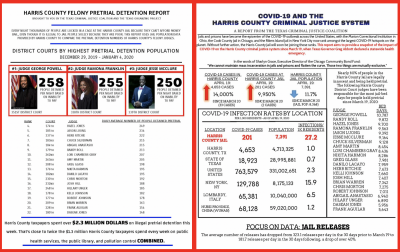 HOLDING JUDGES ACCOUNTABLE: Beginning in September 2020, TCJE and researchers at Harvard University have been releasing individualized scorecards for some of Harris County's felony judges, pointing to pretrial detention rates and racial disparities.

Additionally, TCJE and Restoring Justice launched a series of monthly reports in September, showing the (sometimes low to nonexistent) rates at which Harris County district judges are assigning indigent defendants to the Public Defender’s Office, instead relying on private attorneys.

REPORT SERIES ON MEDIA BIAS: In October 2021, TCJE released The Real 'Bond Pandemic' – a new report analyzing local TV news stations’ coverage of bond. Specifically, we looked at 6 Houston-area TV stations to better understand their role in shaping false narratives around bond reform and the criminal legal system. We found that a significant share of these stations’ stories had a negative slant towards bond reform, that the stories were often misleading about the realities of misdemeanor bond reform in Harris County, and that the stories frequently quoted officials with a vested interest in a negative perception of reform – like the police, District Attorney’s Office, and Crime Stoppers of Houston – without including perspectives from advocates or impacted people. We accompanied the report with an interactive webpage where you can flip through the key stats on the six TV stations we analyzed, read misleading articles with annotations from the authors, compare coverage that includes the most quoted local officials, and check out recommendations for reporters and news stations. We also launched a Change.org petition demanding unbiased media coverage of the criminal legal system. 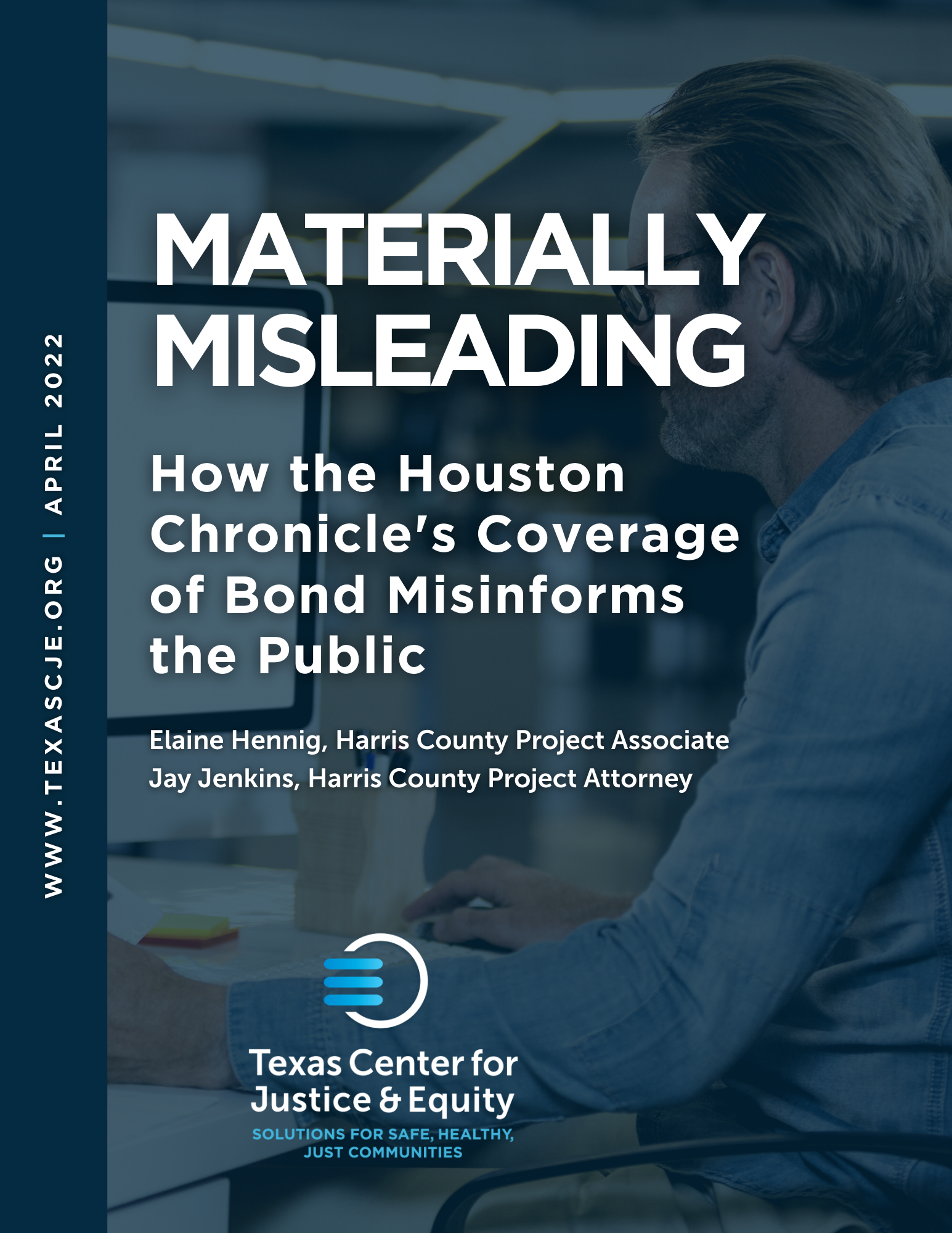 In April 2022, TCJE released the second report in this series, called Materially Misleading, which analyzed articles run by the Houston Chronicle. We found that while the Chronicle provided balanced and informative coverage of bond reform, the newspaper sacrificed its impartiality by disseminating negative coverage of legally innocent defendants who were rearrested while released on bond. Similar to our first report, we found that most of the Chronicle’s crime coverage could be sourced to either law enforcement or the District Attorney’s Office – and when not quoting those sources, Chronicle reporters relied on organizations like Crime Stoppers of Houston, the former employer of District Attorney Kim Ogg; that organization regularly receives hundreds of thousands of dollars in donations from the District Attorney and law enforcement agencies, giving it a vested interest in the outcome of criminal cases.