KPRC had the lowest percentage of negatively biased coverage among the primarily English-language stations, at 48 percent. No articles from this station were coded as positive, and only about 6 percent were balanced. Articles run by KPRC on this subject were found from July 14, 2015, to June 10, 2021, and totaled 52. Of these articles, 17 were primarily about bond reform while 35 were primarily about defendants. 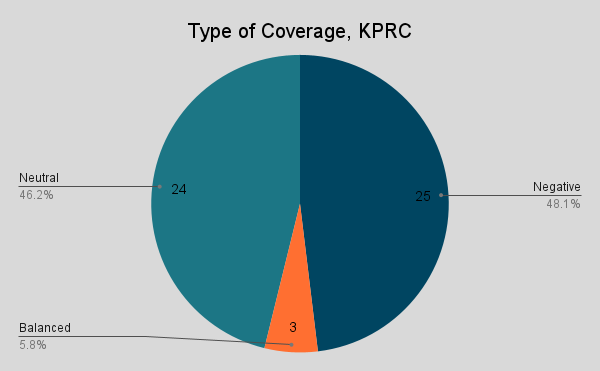 Ten of the 17 articles primarily about bond reform were either about felonies or did not specify the type of bond being discussed, risking conflation of reforms among its viewers.

Fifty-one percent of articles about defendants were about Black defendants, which is an over-representation relative to the 20 percent Black population in Harris County; this disparity is compounded by the fact that 83 percent of all “defendant” articles include a mugshot. Similarly, nearly 30 percent of defendants were allegedly involved in homicide cases in some way—indicating that these types of cases are likely over-covered. 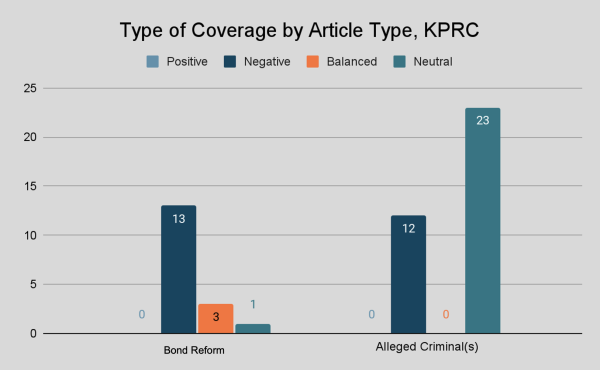 Other findings from KPRC relate to coverage of judges, reporter trends, and changes in coverage over time. Local district or felony court judges were identified by name in 8 articles; interestingly, 7 of those were coded as negative, which raises questions about the potential motivations for referring to judges by name.

Before releasing this report, we contacted KPRC to ask the following questions.

We received a response from KPRC, asking the report authors to sit down with their reporters. In early December, co-author Elaine Hennig met with KPRC staff to share findings and recommendations.