KRIV had the highest percentage of negatively biased coverage among the primarily English-language stations, at 85 percent. One article from this station was coded as positive, and only about 4 percent were balanced. Articles run by KRIV on this subject were found from July 27, 2015, to June 29, 2021, and totaled 54. Of these articles, 21 were primarily about bond reform while 33 were primarily about defendants. 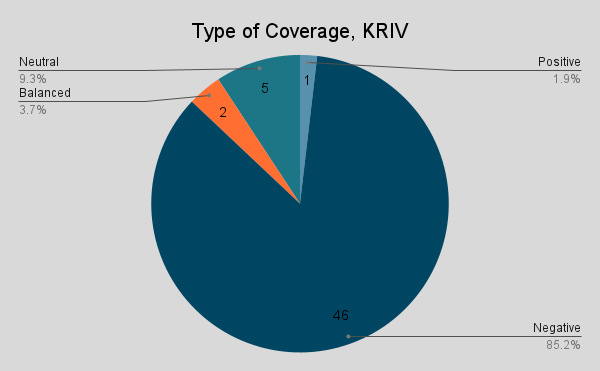 Eighteen of the 21 articles primarily about bond reform were either about felonies or did not specify the type of bond being discussed, risking conflation of reforms among its viewers.

Fifty-five percent of articles about defendants were about Black defendants, which is an over-representation relative to the 20 percent Black population in Harris County; this disparity is compounded by the fact that 97 percent of all “defendant” articles include a mugshot. Similarly, 70 percent of defendants were allegedly involved in homicide cases in some way—indicating that these types of cases are likely over-covered. 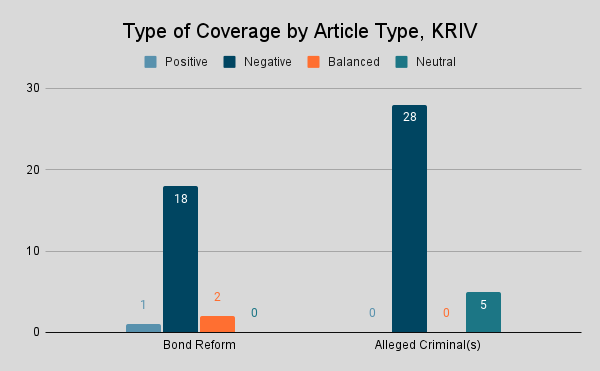 Other findings from KRIV relate to coverage of judges, reporter trends, and changes in coverage over time. Local district or felony court judges were identified by name in 32 articles; interestingly, all of them were coded as negative, which raises questions about the reason for referring to judges by name.

In addition to having the highest level of negative bias in its media coverage of bond, KRIV was also the only station we identified as having a special series dedicated to this subject. Of the 54 total articles KRIV ran, 33 were found to be part of the Breaking Bond series—though this may not be an all-inclusive accounting—starting on November 25, 2020. All 33 articles were coded as negative, accounting for a substantial amount of KRIV’s negative bias. Furthermore, Crime Stoppers was referenced in 30 of these articles, which may explain why 12 of the 15 articles primarily about bond reform make no mention of the actual misdemeanor reforms that have taken place. It is also worth questioning how deeply ingrained this unelected, non-governmental group is with KRIV,1 particularly when considering the extent to which Crime Stoppers is referenced in negatively biased articles. Other issues with Breaking Bond stem from its racialized coverage, which over-represents Black defendants at an even higher rate than KRIV more broadly, and its continued, likely over-coverage of homicide cases.

Before releasing this report, we contacted KRIV to ask the following questions.

We have not received a response. You can contact KRIV to request unbiased coverage through their website.

1  Crime Stoppers refers to Breaking Bond as “our [...] Series” in a press release.